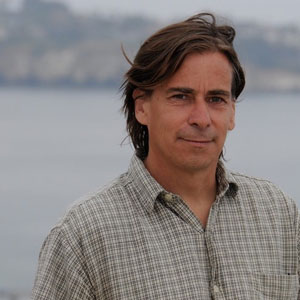 Every new year brings optimism. In January, we declare our resolutions, even if they’re the same as last year’s. And, each year, large enterprises’ CEOs inspire employees with a call to action: “This is the year that we’re doing a big push to innovate.”

"In order to innovate, we need to incentivize things like understanding customers’ needs, taking risks, learning and iterating on ideas to get them right"

It’s a necessary first step, but that alone will not be an organization’s saving grace. If you want employees to innovate, they need to work differently, and it’s up to the leadership to create an environment that enables them to do so.

Here are 5 of the biggest leadership changes that drive real results:

In the 1970’s, Milton Friedman argued the role of business was to maximize value for shareholders. Unfortunately, when the primary focus of large corporations is hitting quarterly earnings, it’s like leaving Michael Jordan in the game for all 48 minutes, every game, all season. Inevitably, he’ll burn out.

Making Wall Street happy through the next earnings report means incentivizing lower operational costs, increased productivity, increased sales, and ultimately quarterly profits. We ask questions like ‘what’s the return on investment?’ and ‘when will we see the return?’.  This is valuable for existing products and short-term profitability, but when venturing into unknown and innovative territory, that’s not what we want to incentivize.

In order to innovate, we need to incentivize things like understanding customers’ needs, taking risks, learning and iterating on ideas to get them right. This is why companies like Amazon have publicly stated they’re not about profitability. Instead they reinvest profits back into the business to grow and explore new markets and products.

2. Creating a Culture of Safety

It’s a humorous contradiction when senior leadership goes around telling people to “be more innovative! Be bold! Take action!”  but the culture in that place makes doing that seem foolish.

Without instilling a culture of safety, the existing structures and success metrics in place will lead to fear and inaction, not successful new products. Instead, the push for bold behavior needs to be coupled with a culture of safety. 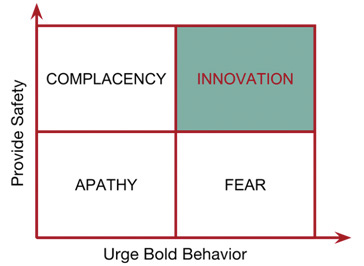 For example, instead of a top-down mandate, General Electric used a program called Fastworks. They started a grassroots culture that embraced nimble experimentation and failing small instead of failing big. As a result, they’ve had lots of success and a massive internal transformation.

The CEO of another one of our clients had a team come up on stage at their leadership summit to share a story of a new product initiative that was put to sleep after some discoveries that invalidated the product. The CEO showcased their “failure” to encourage similar behavior.

In order to create new wins, your organization needs to embrace learning instead of fearing failure.

3. Reign in the Lawyers

Universities and large organizations love to tout the number of patents they have earned. In reality, there’s literally no value for society, customers, or even shareholders inherent within patents.

Despite their technical origin, patents today are written by lawyers, for lawyers, not innovators. They slow down new value as R&D stops at issuance instead of applying the new value in the market. Beyond that, patent litigation reduces profitability, used typically only as a means of protection against the very real problem of patent trolls.

Contrast that with a public statement made on June 12, 2014 by Elon Musk on behalf of Tesla. “Yesterday, there was a wall of Tesla patents in the lobby of our Palo Alto headquarters. That is no longer the case. They have been removed, in the spirit of the open source movement, for the advancement of electric vehicle technology.”

Not only does this enable a greater advancement for society, but it enables Tesla as a company to focus on what matters - bringing technologies to market, not to patent.

Managing people makes a lot of sense when there are very specific tasks and outcomes. It makes sense on existing products that need repeatable processes.

But, that’s not how innovation happens. Embracing learning over execution and instilling the right mix of people and process around the 3 E’s of Innovation: empathy, experimentation, and evidence are vital. (We dive deeper into these in the movestheneedle.com/5ways). In order to instill those values and processes -- mentoring is the key, not managing.

Keep in mind that when we say mentor, we’re not simply talking about how  you can help your young employees manage their career path. That’s part of it, but it’s really about how do we mentor inside the unknown part of our businesses. How can we help guide teams to expose their own assumptions, run experiments to generate data through customer interaction, and use that data to make evidence-based decisions? It’s what creates the environment for insight and gets teams to work in this new way.

5. Innovation is for the Many, Not for the Few

Ways too often we see big corporations try to solve for the innovation problem by leaving it all up to a 5-person innovation lab. This is a step in the right direction, but one team won’t be the saving grace of an entire organization.

Innovation needs to be everybody’s responsibility. All employees should be closer to the customer and capable of not only finding, but taking action upon new insights. We saw a finance team within intuit unlock tens of millions of dollars upon interviewing customers to learn that even though their credit cards expired, they still wanted to continue their subscription. Marketing people who learn entrepreneurial skills can test new customer acquisition and conversion ideas. HR folks can improve internal process.

Innovation can (and should) start small and then snowball into culture of innovation and experimentation. Form one team and then use that to begin shifting the way other teams work. Use small wins and growing evidence to inspire others to work in a different way, and soon that new way can become the norm. Not everyone will be an innovator, but innovation can come from anywhere.

Innovation isn’t guesswork, nor are there any silver bullets. What we do know is that we do have the power to create environments where innovation is more likely to emerge.

Through creating a culture of experimentation and learning and paying keen attention to the 5 leadership changes outlined here, we’re excited to see the way corporations like yours innovate and evolve in the coming years. Happy innovating!